If Romney Gets 61% of the White People’s Vote, He Wins

That’s what he is aiming for.

The Reason the GOP is So Insistent on Voter Suppression

They can’t even run their own party elections right.

Remember, they screwed Santorum.  Remember they screwed up in Maine.  That’s just off the top of my head.  Why on earth do we elect them to take care of voting here in Texas when they can’t even secure the property?

Are They Really Catholics?

I’m only asking because that guy who inherited his Christianity through his father, Franklin Graham, isn’t so sure that President Obama isn’t a secret Muslim. 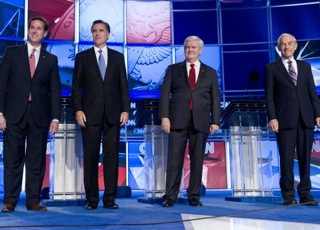 I thought Newt and Rick were Catholics.  All the Catholics I work with (and there are more than a few) had ashes on their foreheads today.  Aren’t Catholics supposed to leave the ashes on until they wear off or do both of those guys secretly have one of these?

I’m thinking neither of them did it.

I’m thinking they care about Ash Wednesday about as much as they cared about MLK Jr. Day.

Amazingly, the Republicans Kept Their Own in Line

It probably helped that the conservative SCOTUS people skipped it.  I’m sure they had better things to do.

The old white guys on the channel I was watching immediately complained about taxes.  Sigh.  Poor little old white guys pay more in taxes that most people earn from their labor.  When will this get old?

Mitch (Arab) Daniels was just terrible.  I can’t believe that he said that the president’s family was an “example that was needed” or some such.  Oh, really Mitch, given your family issues?  Really?  Perhaps all blacks should follow your model.  ASSHOLE.

Radio, mostly talk radio, is well known for its idiotic portraits, but this one takes the cake:

And to think this idiot has people who hang on his every word every day, from early in the morning to late in the evening.  If his boy Rick Perry had done better, he would probably be doing better.  As it is, his book will never be published, he will remain a clown and my god, he will be an idiot.

I challenge even Kevin Whited to explain this photo to me.  Kevin?  Cory?

All I Have to Say about the Republican Debate

Just flip to ABC and see that we’re now down to the   white guys.

That didn’t take long, did it?

Some wanker in Georgia is getting his 15 minutes of fame:

WACO, Ga. — A west Georgia business owner is stirring up controversy with signs he posted on his company’s trucks, for all to see as the trucks roll up and down roads, highways and interstates:

“New Company Policy: We are not hiring until Obama is gone.”

“Can’t afford it,” explained the employer, Bill Looman, Tuesday evening. “I’ve got people that I want to hire now, but I just can’t afford it. And I don’t foresee that I’ll be able to afford it unless some things change in D.C.”

Looman’s company is U.S. Cranes, LLC.  He said he put up the signs, and first posted pictures of the signs on his personal Facebook page, six months ago, and he said he received mostly positive reaction from people, “about 20-to-one positive.”

But for some reason, one of the photos went viral on the Internet on Monday.

And the reaction has been so intense, pro and con, he’s had to have his phones disconnected because of the non-stop calls, and he’s had to temporarily shut down his company’s website because of all the traffic crashing the system.

Looman made it clear, talking with 11Alive’s Jon Shirek, that he is not refusing to hire to make some political point; it’s that he doesn’t believe he can hire anyone, because of the economy. And he blames the Obama administration.

I know what it is like to operate without enough people.  I also know what it’s like to try to run something without enough qualified people.  This joker is just that:  a joker.  If he needs more workers to make his business profitable, he would hire anyone he could get, just like my department has.  ANYONE.  We are so desperate we are hiring retired people.

He obviously doesn’t have enough work for the people he’s got employed.  He obviously is fishing for business.

I know what it is like to operate without enough good people.  This guy is NOT doing that.

calle viena
Create a free website or blog at WordPress.com.