I’m trying to add some more media. I figured it out. 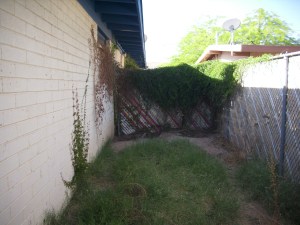 This is what the west side of the house and yard looked like before I got started.  What you can’t see is all the pup poop.

Posted in Four-footed Ones, Garden, Home

Murphy, Corn, and the Beds

I planted a bit more corn and beans.  Then I saw this through the window: 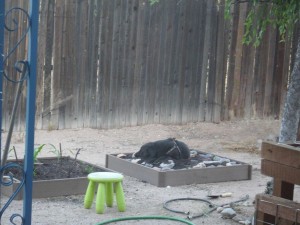 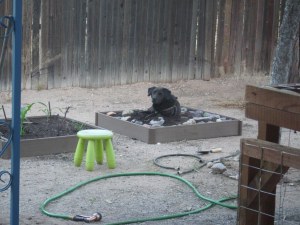 Even though Dora HAS dug in the beds, it looks like the major culprit is Master Murphy.

Amazingly, a couple of corn plants survived.  I need to adjust my approach to the yard, planting and pups.  We’ll figure it out.  Mostly I think that it’s the newness of the beds.  Both pups like to dig to nowhere, so the beds are attractive.  Murphy also enjoys dirt baths regularly.

An Exciting Day (for me at least)

I’m an idiot when it comes to keeping my camera’s batteries recharged, so pictures will have to wait until tomorrow.

First, my very Kung-Fu like battle with the grasshoppers continues.  I don’t want to kill them, I just want to fuck with them.  I’ve got about four — one is HUGE.  I pester them by looking at them and then slowly anticipating their avoidance maneuvers.  It’s a game of “you can’t see me” and “oh, yes I can!”  I zapped them with the garden hose yesterday and this morning.  Those fat fuckers were back later in the afternoon.  There’s one that I just plead with.  She’s (?) just on the sunflower.  I beg her not to be greedy.

The swallowtail caterpillars are another story.  I love them.  It is amazing how quickly they grow.  I spotted another cocoon, and one that is making a cocoon.  They didn’t much care for me watering the damn parsley they are living on, but what’s a caterpillar to do?  One showed its “horns” but that was about it.

I didn’t write about the possum earlier.  I wish I had.  A possum got into R’s bathroom and Dora was throwing a fit.  R went in and discovered the possum last week.  We set the(humane!) trap and then nothing happened.  Until today.  I was putting some clean bedding in R’s room, and there was that smell.  That possum smell.  Sure enough, it was in the trap.  I had no idea how long it had been in there, since I hadn’t checked it everyday.  In retrospect, it had only smelled today, so the damned thing was just playing possum.  I put a cloth over the trap, took it out to the driveway and opened the back.    The first couple of times I checked it (via the window — possums give me the heebie-jeebies ) I thought it was dead.  I kept cleaning up its mess and checking on it until it finally left the trap.  Possums aren’t the smartest animals in the world.  It went along one side of the fence, and then it turned back, only to go into the area it had just avoided.

Later the storms came.  Dora got under my desk.  As I was watching the weather on TV, Dora came over and tried to curl up in another little nook.  I went back over to the desk, in an attempt to get her to go back there, and noticed a puddle on the floor.  At first I thought she had peed herself.  Bad mommy.  Rain was streaming in the house from under the window A/C.  I apologized to Dora and sopped it up with the towel I had planned on using to dry off Tammy and Murphy, who were still outside. Upon coming back to the leak with another towel, I found Francisco licking rain water off the wall.

The storm passed without Tammy or Murphy wanting in.  They seem to enjoy the yard more and more.  Dora finally sacked out on the bed, and the kittens finally ate dinner and fell asleep next to their food bowls.  The outside kittens ate during the shower, and I fucked with the two grasshoppers I found.  I checked on the caterpillars, but didn’t find as many as I did this morning.  I’ll look for their cocoons tomorrow.

Finally, I have decided that food is only a side show to my garden.  Keeping up with the insect life and figuring out how to take care of each living thing is more important than how much my garden produces.  It’s an ongoing experiment, and while the end result might be a very productive garden, my end goal is to have a place where all of the living things have a chance to thrive.

Posted in Four-footed Ones, Garden

Each year there is one thing that makes me happy.   This year it is butterflies.

This is the second swallowtail that I have seen emerge from its cocoon.  There have been several swallowtail caterpillars, but I have only found two cocoons.

I have a now crappy old camera, and it’s not changing any time soon, but I can still get some pretty good pictures.  Well, i can get some decent ones. 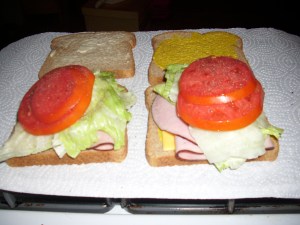 First Sandwiches with the Red October tomatoes.  I have struggled with tomatoes this year.  Now I am employing a “vacuum and bag” strategy.  We will see if it works. 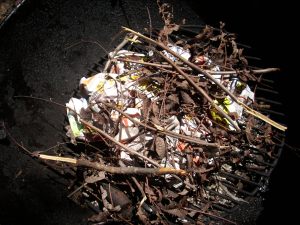 I have grilled only with pecan wood for a while now.  Here’s how I start it, with a little paper and small branches and leaves. 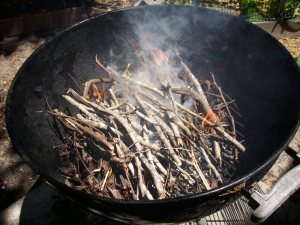 Same fire later with bigger branches.  I eventually added a couple of larger chunks and cooked potatoes wrapped in foil down under and some burgers and chicken.  This was last weekend. 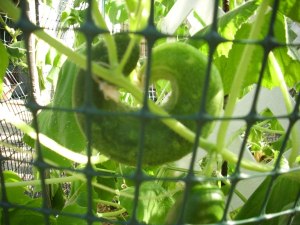 I now know this odd cucumber is either funky seed or lack of water.  I’ve  resolved the water issue since.

This a a Swallow Tail caterpillar, as is the one at the end.  I’ve had more butterflies this year than dragonflies, which is ok.  I’m glad that I had a nice patch of parsley for them, though this one landed on the lemon tree.

We are going to have a mess of okra this year.  I need to stock up on pickling spices.  Okra is the new cucumber. 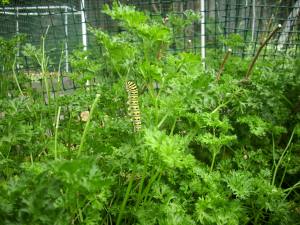 A different Swallow Tail caterpillar.  This morning there were about five munching on the parsley.

I feel really good about my garden and somewhat hopeful about the front yard.  The sunflowers are thriving.  I’ve got lots of plants humming along and have the time and energy to keep it going.

Stink bugs and my trial solution

We’ll eat a couple of these this weekend.  One will just be for seeds — the stink bugs got to it — and the other is still green.

I ripped up a couple of old shirts and tied the cloth around the rest of the tomatoes last Monday until I could get the muslin bags I ordered.  Those bags came in today and I replaced all of the clothes I had put on the tomatoes this evening.  24 total and more blooms coming along!

The rest of my garden after the jump. END_OF_DOCUMENT_TOKEN_TO_BE_REPLACED

It’s time to change out beds:

Here they are.  This bed will get peppers tomorrow. 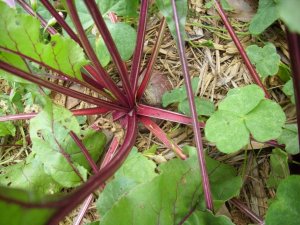 The promised snack:  I had read about steaming beet greens and my all female upper level class are game to try it.  There were a few caterpillars chomping on the leaves, but I got enough good greens for a taste for our small class. 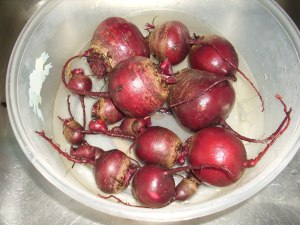 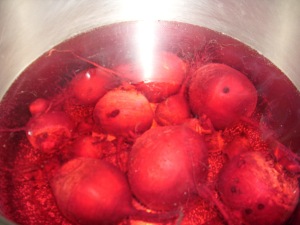 I couldn’t get a good pic of them in the pot.  And those are bubbles.  Just as the water started boiling, I put the greens in a basket over the beets in the water.

I tasted a bite of the greens — they are like spinach in texture, but not stinky and taste sort of like beets.

Today was a Good Day.

All the pups had cookies for dinner and all of the outside kittens showed up for breakfast ans dinner.   The okra has sprouted, as has the sunflowers, tomatoes, catgrass, and some flowers.  Tomorrow I’ll be planting.

There was some commotion with the blue jays earlier this evening.  All of the pups — mine and neighbors’ — were interested.  It seemed that a fledgling got out of the nest, but wasn’t quite able to fly.  Three males were circling — one must have been the dad.  I couldn’t tell what happened in the end, but I love the bird watching.  I credit the wrens living next door with the lack of worms bothering my tomatoes.

I think this is the beginning of the payoff for not using chemicals in my garden.

A Little Harvest and Eats

I don’t know which pic is better, so I will let Roberto decide: 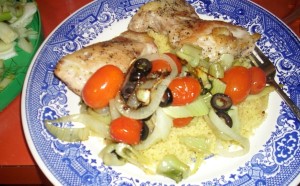 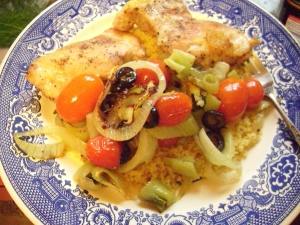 It’s free range chicken from Kroger’s, seared over the stove top in a pan that can do both that and go into the oven.

After I took the chicken out, I added fennel picked from the garden this morning, garlic, and a sliced yellow onion.

I added tomatoes and olives and then put the chicken on top and put it all in the oven for 20 minutes.  Then I made couscous with low sodium chicken broth.

The above is the result.

I also picked a number of carrots, which will make a nice lunch for tomorrow.  I’l  freeze what I don’t eat.

BTW, the crappy freezer my mom and sis gave me died again.  It can’t even keep ice cubes.  If I had all of the food back that I lost because that freezer still had it’s light on like it was working . . . I could have probably bought an American made freezer.

I have temporarily given up on installing a pond, so I built a bed and planted 5 horseradish roots.  The kittens like to sleep in the bed since I put down the plastic fencing stuff, and so they don’t feel like digging in it.

All five roots have sprouted.

We had homegrown fennel along with some free range grilled chicken last night.

The cucumbers are back in the bed I had them in the first year and thriving.

The pole beans that a friend gave me the seeds for are climbing well, right next to the tomato plant that made it through the winter.  I let the lettuce and cilantro bolt — again — and so it seems that in a few years, that’s all I’ll have as far as weeds go.

I took the bus home today.  It was actually nostalgic.  I often think of my time in Riga and taking all the different forms of transportation to make my way around the city.  That was many years ago, and I have always been angered at how backwards just a few people in this city can be about mass transit.  Even though we got rid of Tom DeLay, there’s always someone else to step in all big footed and jam up the progress.

I had a nice conversation while waiting for the bus.  It was with a woman who works at the zoo.  Another followed when a man got on at a stop along my way.  He was surprised that I said “hello” to him with such confidence.  I’m not afraid of anyone, and besides that, I have to work with Saudis EVERY DAY.

At any rate, despite my doubts yesterday evening about my plan to basically hide from the EASTER PEOPLE this weekend, I think those two encounters made it clear that it was the right decision.

Barring any technical difficulties, I see many pictures being posted over the next two days 🙂