It’s a race of chicken for them and Sarah Palin.  The one who hangs out to the very last will be the “Savior” of the country.  Who will drive that car to the end?  I don’t care because it’s gonna be Mittens the dog torturer anyway, but hey, the ride is fun, especially watching the media slobber over each in turn.  I’m looking at you Judy.

Rules to Live By

Don’t lie within an hour

They have no right to my microphone.

Don’t begrudge people their little bit of government help.  I heard that someone I know is ready to walk away from her house and mortgage.  The same person who castigated me for not refinancing my mortgage before the housing crisis.   The person who told me about this also has a problem with people using the food stamp program.

As we all get ready to meet with our future, perhaps some are more ready than others.

I find myself better prepared.    Any little thing could change it, but I’m ok.  It’s not because I make a lot of money or anything.  I prepared.

The road ahead of me is long and hard, but I know I have food in the freezer and I can plant more tomorrow.

Picture of the New Fence

I love my new fence.  As I said to David, the guy who built it, I just gave my neighbor a really nice fence, since the “pretty” side faces his yard.  For me, it’s sort of the opposite of what most want.  I like the “other” side facing my yard.  It is an enclosure that I can see and feel.  It gives me comfort and a sense of security and privacy.  I’m on the inside.  I like it.

First a before picture.  I’m sure I have more, but this one is at hand: 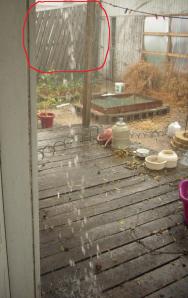 I’ve circled the fence as it was falling last weekend when we got some rain.  The fence was leaning after Ike and then Tropical Storm Lee blew it over more.  The rain was the last straw.

DB Fence took down what I was afraid to — it was a good thing.  The fence was very heavy and I understand it was difficult to do.

Here are some pictures of the process mid-stage and then the finished fence.

I’m very happy and it is a beautiful fence.  Working in the yard this morning, I can see my plan coming together.

END_OF_DOCUMENT_TOKEN_TO_BE_REPLACED

Posted in Four-footed Ones, Garden

The New Fence is In!

It was a little too late to take pictures by the time the DB Fence guys left out of here tonight, but I will take some in the morning.

The new fence is GORGEOUS.  David took the time to pick pickets that are beautiful and none have holes or splits.  The 12″ base boards will insure that nothing will rot — at least not for a long time.

Neighbor came over and had a look.  He confirmed that I got a really good price for the great quality.  I knew that already.  The gate is perfect and I can lock it inside or out with a pad lock.  I have one that I’ll put on tomorrow.

Now that the fence is in, I will get busy with planting.  I’m a little worried that it will be too hot for some seedlings and then not so worried about others I will try.

This wasn’t an expense I had planned for.  I probably would have put it off for a long time had the fence not fallen down, but now that it’s done, it’s liberating.

Needless to say the pups are pooped after barking for hours yesterday and today.

That should now be clear.

I don’t know why Perry’s people didn’t keep him out of the race until this spate of debates were over.  Seriously, why not let these debates pass and then become the savior candidate?   Was he worried about the Johnson guy from New Mexico?

Now, the death cheering, military booing crowd wants Chris Christy.  And what will that bring?  More of the same.  The usual suspects, Michael Berry, Chris Baker, Kevin Whited, and Cory whatshisname will poo poo Perry now, but just wait for them to defend him once this debate this is over and Perry can go out and stump on hay bales (very expensive now).

The dance these four do is more entertaining than anything they try to cook up about immigrants or businesses or their insider baseball on republican politics.

There’s quite the population on death row here in Texas, but it just takes one White Guy to take away something that all of the others before him, mostly not white, have had, at the least:  a last meal.

The man who, along with three others, dragged a man to his death, ordered a lot of food and then refused it just before he was put to death.  All of the other poor souls who have been executed — both guilty and not — have had the decency to ask for and then eat the last dinner they were served.  However, because one white man, and presumed McCain and Bush voter, decided to make a point, every  other person in his position in the future will not have the thing he decided would piss people off.  And it did.

A simple solution to this would be life sentences.  The solution taken was mass punishment all because of a spiteful petty white guy.

Way to go White Guys.  You’ve made everything so great for all of us.

We got a little over an inch.  And even though the city thinks my property has a lot of runoff, I know it doesn’t.

I refrained from dancing in the rain and getting drunk and sitting in a lawn chair in it.

The wheelbarrow was full of water.